Due to a very unfortunate accident in Yangon a month ago, I got a head trauma. We involuntary entered the medical circuit of commercial money-making hospitals in Bangkok, alternative medical advice in Yangon and nasty private Asian insurance companies.  We got a quick training-on-the-job.

At first we went to an international hospital in Yangon. This certainly is a good first step when you do not feel well. The principal Doctor is French and French Doctors are known to be easy on medication. We always end up with a lot of pills in the hospital bag. This Doctor, who furthermore is a nice and sociable guy who knows everyone in town including their medical records, also does not mind if you drink a glass of wine with it (or two).

On top of the pills, I was recommended to relief my pain by visiting an acupuncturist or osteopath. I did not have much experience with osteopaths, but people assured me that it was a very gentle treatment. And I was in Asia, where old philosophies are still very much alive and trusted, so I  did not see any harm in visiting one. The treatment took 1.5 hours and consisted of Himalayan wood burning to protect me from negative energies,  some mild stimulation of my neck, shoulders and hips, and sound therapy. I undertook it with a smile, but it did not help. Instead the pressure on my head got worse.

After a negative MRI in Yangon, one week later, I ended up in a commercial private Bangkok hospital. Without studying the recommendation letter from Yangon, the MRI or me, the 70+ years old surgeon at this hospital, who hardly knew how to manage his computer, decided in a minute that I had to be operated. Tomorrow if we wanted. After that I would be a young girl again. We, flabbergasted, mumbled that we wanted to have a second opinion first. ‘Okay’ he said and we were standing outside again. What was I to him? A money maker or patient?

The specialist from the Netherlands, who we spoke to on the phone, had a totally different approach: ‘we hardly ever operate this kind of malformation’, which I supposedly already had my whole life. Just wait and see how the headaches develop, was the advice. Although we liked his down-to-earth way of doing, it also felt like a sober, Calvinist advise. Cause, how long to wait for?

I decided to really take a break and do nothing but reading a book and writing a column. Unfortunately the headaches became worse. At the end of the week, I could not even go outside anymore, so we requested another Bangkok visit with the Asian insurance company, which we pay a large sum of money every year to be internationally insured.

The insurer told us that they only cover costs to go to Bangkok if it turns out afterwards that it was needed to go there. If not, you pay your flights, hotel costs and medical transportation from the airport yourself. A strange kind of practice, considering the fact that most specialists are not available in Yangon and we were advised by a Doctor to go to Bangkok. For every expenditure we need to get approval, which can take up to 48 hours. Not very accommodating, when you have to make decisions the same day.

Anyway, health goes above everything, so off we went again. Leaving the kids in tears. We went to another academic hospital, where we spent 1,500 USD on another MRI. Something I can not recommend anyway: two hours in a claustrophobic tube with horrifying noise that make all the parts of your body shake. I survived by singing all the songs I know and picturing all the beautiful places that I have been to in my life. Another 1,500 USD was spent on a room, medication and crappy hospital food. That’s at the least everywhere the same. 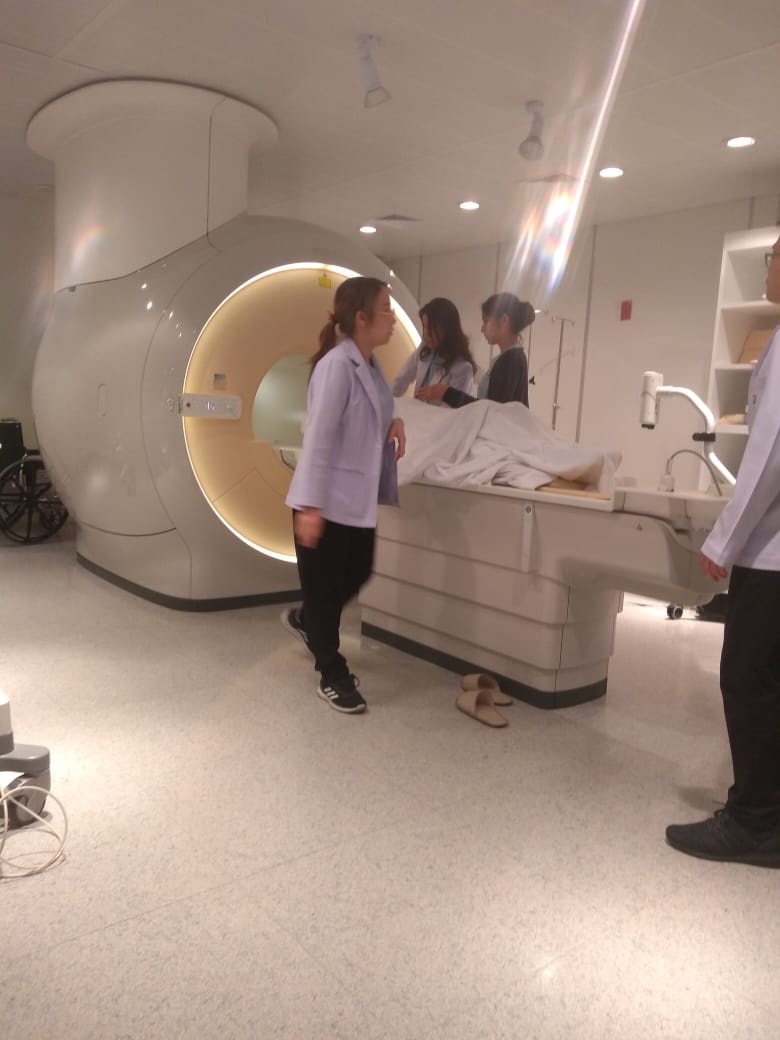 During the two days in this hospital in which different specialists presented different scenario’s, we were constantly hopping from one emotion to another. In the end there was only one Doctor who gave us the confidence about what to do. He ensured us that we do not have to worry.

We have learned a lot these past few weeks: that you need to know the mission of an hospital (making money or giving care), that Doctors can really make you feel worse through how and what they communicate, that you need to think for yourself and get a second opinion, among others.

We are back in Yangon now to recover, not only from the head trauma but also from this emotional rollercoaster, which to a large extent has been caused by an in transparent, ambiguous medical world. Tonight we will drink one (water for me) to our health.